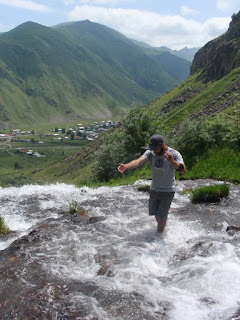 GuramVashakmadze is a rare pearl: he is very modest and well-behaved, always smiling and polite, courageous and inventive, he loves his country and knows it's history in a such a way that it is astounding! GuramVashakmadze is young, restless in hart. Being close to Mother Nature he became very wise. I remember one thing he said to me, while we were climbing a steep mountain on our way to Gergeti Trinity Church (from XIV century), situated above village Gergeti in Georgia (2170 m). We were talking about liaisons, and Guram Vashakmadze said a very wise thing: if a person cannot accept who you are, you should not be with that person. He learned that the hard way – climbing mountain tops.

You study at Leopold Franzens University Innsbruck – Faculty of Political sciences - 3rd semester and at Free University of Tbilisi - Faculty of Governance and Social Sciences - 4thcourse. How do you do it and why?


At the present moment I study at the Free Uni of Tbilisi, 8th semester which is the last one on my way to bachelor degree. I took an academic pause in Innsbruck. To be honest I think I could have been way better in my academic life than I do now. But as long as I spent a lot of time in other for me very important things I do not regret past 4 years at all. I regard myself as a good student. I think I could be in the best 20% of the class.


My knowledge of my country and history consists of all those experiences and information which I gathered from the academic and nonacademic activities, like school, university sports, mountaineering and relations and connections with a lot of people from different regions of Georgia.


Can you tell me something from Georgia’s history (https://en.wikipedia.org/wiki/Georgia_(country))?


The whole history of Georgia is a saga of bloody wars, heroic stories and political games between huge empires and little states. I would like to mention Didgori battle from 12th century. United Georgia under King David IV with 40.000 went against Islamic coalition of 200.000 men and beat them. This battle determined the future of whole Caucasus and the Holy Land.[1]


What do you love the most about your country?


The diversity of nature and the possibility of extraordinary life which it gives to me.


You are a trekking guide, assistant mountain guide (above 3000 m) at the tours organized by “Mt. Kazbegi Climbers House” (http://www.hostelworld.com/hosteldetails.php/Kazbegi-Mountain-Hut/Stepantsminda/77974) and a ski-teacher at Hotel “Gudauri” at Gudauri Ski Resort, Georgia (http://www.gudauri.info/). How hard is it to climb high mountains? How hard is it to work with people in extreme conditions?


I choose to be an assistant guide deliberately, because being a guide is a huge responsibility, it requires knowledge and experience. The guide must be cold minded and fully concentrated on his duty, sometimes it’s the matter of life and death. As an assistant guide I have opportunity to learn more from experienced mountaineers and don’t stress myself way too much. It is always difficult to work in extreme conditions, especially on high altitude, even if there is no emergency situation. The guides always have to control the condition of the group and take safety measuresat the same time. Sometimes guides behave against the will of their clients, even if it could result in a conflict between them, but we should not regret this. Safety first!


How old were you when you started climbing?


I started climbing at the age of 12.


Why do you love climbing?


There is some kind of special feeling which I get only in the mountains. The feeling of freedom and the feeling that your fate is only in your hands and what happens next depends on your decisions. 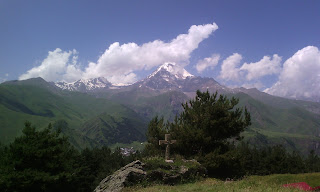 How old were you when you first climbed Mt. Kazbegi (5047 m)? How did it feel? (https://en.wikipedia.org/wiki/Mount_Kazbek)


I was 15 when I first climbed Mt. Kazbegi. The ascent was one of the most horrible experiences I’ve ever had. J I was super exhausted morally and physically. I felt the whole greatness of my achievement only on the way back to Stepantsminda when I looked back at the summit’s white shining hat.


Can you tell me what the Project “Uplistsikhe Challenge” (https://www.youtube.com/watch?v=bpSRWlnl76g) is all about and what is your role in it?


“Uplistikhe Challenge” was the project of National Agency for Cultural Heritage Preservation of Georgia. Uplistikhe is ancient cave city of Georgia, located in Shida Kartli region, near Mtskheta.[2] The project included sportive and intellectual activities into one relay-race competition. I was part of it and took part in organizing the whole event.


You are a member of a national freestyle ski team of Georgia. How old were you when you started skiing?


I started skiing at the age of 3.


You took part in various international competitions like World winter Universiade and FIS freestyle World Championships. Did you win and when and where?


On World Championship in Kreischberg[3] 2015, Austria I ended up 42nd which counted to be a good result considering the preparing conditions in Georgia. My best international result is 18th Place at the World Universiade Trento 2013. I continue my training and hope for better results in future on EU cup in Austria, st. Anton. I won domestic championships 2 times in 2014, 2015 and ended 2nd once in 2013.


You also took part in a freeriding ski competition. Were you any good?


On a scale of international level I believe that I am better freerider than freestyle skier. I won Georgian Freeride Tours in 2012, 2013 and Georgian Universiade in 2014. 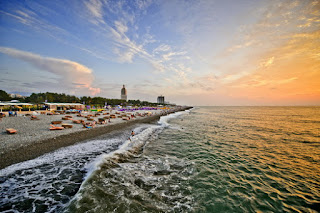 
Like many others I started playing rugby while I was still a kid. I won Georgian rugby B league championship among youth (15-16 of age) and following year got a silver medal in A league (17-18). I also played several professional games in Georgia’s highest league for R. C. Jiqebi (snow leopards). I stopped playing rugby professionally because of education and skiing.


You also took part in a diving Championship of Georgia…


Ah… yeah that was a while ago :D Diving was my first sport in which I got some passion. Still as a kid (I think I was 8 or 9) I took part in Georgian Championship among children and got 2nd. I remember I got no silver medal but a diploma and big box of car toys.


You are worried about Georgia’s struggling with the ecological problems and suffering from pollution and landscape degeneration. What are you doing to change it?


Georgia is a developing country. Our economy grows pretty fast and situation changes from year to year. This is the reason why our people cannot adapt to new realities mentally, economically and infrastructuraly. The problem lies not only in the system of governing but in the education as well. We need to learn how to maximize ecological protection level and increase our wealth at the same time and this should start already at schools. As an athlete and mountain/trekking guide I am always promoting the pollution control and environment protection. Our national ski team several times cleaned slopes and gorges in the Caucasus. We tried to show an example of peaceful cohabitation with Mother Nature. Unfortunately at the moment I am not actively involved in those activities but I am sure soon or later I will get back to it.


Is there room for cooperation between our two countries when ecology is in question? How can we help each other?


Georgia is a mountainous country which has specific landscape and the matter of ecology is also specific here. Georgians have good experience in working on high altitudes which could be useful for any other country. On the other hand we are in lack of technologies and educational and informative projects.


What are the most important features of Georgia?


In what way do you try to improve tourism in your country?


Nowadays I am trying to promote extreme sports in Georgia, which are actually world’s widest increasing sports in terms of popularity and commercial interests. I am especially trying to push extreme skiing on the frontline of our winter tourism business. I believe that freeriding, touring and freestyle skiing could make our winter resorts most popular in the region and famous among European and American market. Also it develops skiing culture and makes the connection between human and nature stronger. 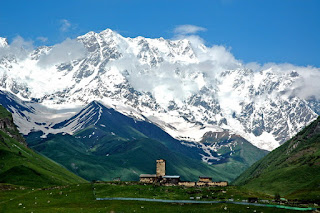 Why should one visit Georgia?


By visiting Georgia you could discover whole new continent in one tiny country, with huge and peaceful diversity of cultures, languages, people, landscapes, cuisine and so on… From high and mythical mountains of Svaneti[5] via beautiful vineyards of Racha[6] and Imereti[7] you could travel to subtropical beaches of Black see. In one day you could sneak into jungles of Mtirala[8] and at the same day go back to super urbanized city of Batumi, enjoying nice sunny weather and swim in the Black sea. The religious life of Georgia and the strength of the church make this country even more unique for tourists. The old cave cities and south-eastern deserts will attract anyone who likes safari. Shortly: ALL IN ONE! Visit Georgia! :)

[1] The Battle of Didgori was fought between the armies of the Kingdom of Georgia and the declining Great Seljuq Empire at the place of Didgori, 40 km west of Tbilisi. The battle resulted in King David IV of Georgia’s decisive victory over a Seljuk invasion army under Ilghazi and the subsequent reconquest of a Muslim-held Tbilisi, which became the royal capital. The victory at Didgori inaugurated the medieval Georgian Golden Age.
[2] Uplistsikhe ("the lord's fortress") is an ancient rock-hewn town in eastern Georgia, some 10 kilometers east of the town of Gori, Shida Kartli. Built on a high rocky left bank of the Mtkvari River, it contains various structures dating from the early Iron age to the late Middle ages, and is notable for the unique combination of various styles of rock-cut cultures from anatolia and Iran, as well as the co-existence of pagan and Christian architecture.
[3] Ski resort.
[4] https://en.wikipedia.org/wiki/Dmanisi_skull_5
[5] Situated on the southern slopes of the central Caucasus Mountainsand surrounded by 3,000–5,000 meter peaks, Svaneti is the highest inhabited area in the Caucasus. Four of the 10 highest peaks of the Caucasus are located in the region. Prominent peaks include Mount Shkhara (5,201 m), Tetnuldi (4,974 m), Shota Rustaveli (4,960 m), Mount Ushba (4,710 m).
[6] Racha is a highland area in western Georgia.
[7] Imereti is a region in Georgia situated along the middle and upper reaches of the Rioni river.
[8] Mtirala National Park is a protected area in Adjara region in Georgia.
Објавио ČISTO I BISTRO у 00:39 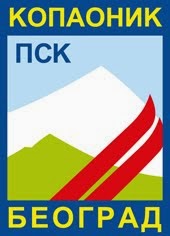